It was terrific that the last post was so well received. It would seem that from others’ experiences and some more of my own that a lower pressure/flow has the potential to improve extractions irrespective of the grinder. The suggestion being that lighter roast coffees are harder to extract from evenly as a pressurised pour over (aka espresso) and that a lower flow rate helps with this.

The dialogue on the topic of pressure has mostly suffered and been stifled by the conceptual differentiation of flow rate and pressure. I was motivated by this misconception and wanted to explore the language and theory in this post.

We can start by stating that flow rate applies only to water and pressure refers to only the pump. In an espresso machine, the pressure determines the flow rate of water, but this pressure is not the hydrostatic pressure of water.  The pressure in an espresso machine refers specifically to pump pressure: whatever technology the pump is based on. Flow rate and pressure are not the same thing when dealing with gases, but all we care about when talking about coffee extraction is the rate at which water is pushed through the coffee bed.  Before we can explore the physics, we must go on the journey water takes through the machine.

When we make an espresso, water is forced towards the group using some sort of pump.  This force comes from applying pressure to the water.  But this does not mean that the water is pressurised.  Where did the word ‘pressure’ come from in terms of espresso machines?  Pressure is an important measureable for gases and most espresso machines force water through the pipes using some form of pump.  This is very different to applying ‘pressure’ to water.

Now that the water is moving, it progresses through the group, followed by exiting the shower screen.  It then comes into contact with a resistant barrier (the packed coffee dose).  Instead of permeating through the coffee, water is continually pumped into an open head space above the coffee. Once all of this space has been used up and there is nowhere else to go the water is forced through the coffee.

The coffee and the holes in the basket are effectively the exit point for the water. They’re simply resistors, so the flow rate is defined simply by the rate in which the coffee travels through these resistors.  We use liquid water to make coffee, which makes the discussion of pressure somewhat easier. Unlike something like air that will readily compress significantly under pressure, water is almost completely uncompressible. For example, at 4km beneath the ocean’s surface water only compresses by 1.8% by volume. Hydraulic cranes work by filling metal sleeves with water that will not compress even when lifting very heavy objects.  We know that water expands when temperatures deviate from 4 ºC, but, in terms of an espresso machine, the density of water is only a function of temperature, not pressure, and this means that we can measure the flow rate in L/min.  Any object in the way of the flow of this water will slow its rate.

It gets tricky here, because in an open system (where the water can leave by for instance flowing out of the basket) means we must consider displacement. The water entering the basket displaces the water already occupying the basket. Given that the basket (including coffee) is the resistor; the rate of displacement defines the “pressure” in the basket. Note that this effective pressure is simply measured by flow rate, and hence if the pump pressure decreases the flow rate does too.  Not because the water itself is less pressurised, but because the force pushing the water is less.  When we increase pump pressure we increase the flow rate of water exiting the shower screen and vice versa for a lower pump pressure.

There is another way to lower the flow rate coming out of the group head called a flow restrictor.  A flow restrictor is basically a little pipe that the water passes through during its path to meet the coffee. It effectively funnels water into a narrower pipe, and like traffic on a motorway getting pushed into one lane, the same volume of traffic will now take longer to pass the same distance effectively slowing the traffic rate.

It’s much easier to just adjust the pump rather than exchange a flow restrictor.

This second image displays how flow rate going in can be altered to achieve the same outgoing flow rate when the flow restrictors are different. 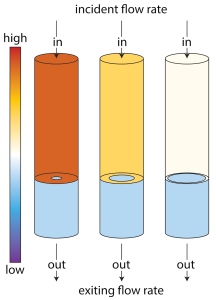 It would appear that discussing pressure and flow restrictors over complicates the discussion. In terms of sharing brewing parameters it makes more sense to describe the amount of water that exits the group in a given time with no resistance. This way we implicitly understand the relationship between pump and flow restriction on a given machine.  It also removes the obvious variable of grind size, which directly determines how strong a resistor the coffee bed is.